Before I came across Samsung Galaxy S8, I had presumed that the 6.2 inches display would be too large to handle, but I was quite surprised on a rendezvous with the actual phone.
It doesn't look that big at all. In fact it's width is even less than any 5.5 inches phone. This is because Galaxy S8 Plus has almost no bezels.  It has 83 per cent screen to body ratio in a compact palm-sized form factor.
Though, it is a bit tall, it looks pretty smart and the design is best in its genre.
The back of this phone has a glossy shiny finish,  but,  it's not slippery at all. In fact,  it's very comfortable to hold,  has a great grip and is very much pocket-able.
The curvier continuous sheet of glass with an edge to edge display and no physical buttons, imparts this phone an unparalleled beauty to behold. It comes with Corning Gorilla Glass 5.
Once you come across it, you'll instantly fall in love with it and would intensely feel an urge to own it. Till now, Apple was renowned for making the best looking phones, but with S8 Samsung has broken all barriers and barged ahead of iphone in looks.
It is undoubtedly the most ergonomic all-glass phone in smartphones history.
This phone is an iphone killer and has the charm to lure even an iOS lover to shift to it. The home button along with back and recent keys are all software based.

The display is just awesome and works intricately with its gorgeous exteriors to make it all-in-all a superb phone. Its greatest USP is its infinity display. S8 plus has an unusual 18:5:9 aspect ratio, instead of the traditional 16:9. Long back, Samsung had visualized a smartphone with maximum display, which it achieved in S8 and S8 Plus.
It has a 2960×1440 pixel (WQHD+) resolution and super amoled panel boasting of saturated colours with deep black. After LG G6, it is the second smartphone in the world to support HDR 10, which results in one-of-the-kind cinematographic experience. The phone, by default has a Full-HD setting to conserve battery life. The WQHD+ mode has to be manually enabled from the settings, which in sync with HDR 10, let you see the same vibrant colours and contrasts that filmmakers intend while watching content.

The 64GB internal memory meets well the requirements of even heavy users without the need to insert any external memory card. This comes as a relief for dual sim users, who crib over a hybrid sim slot that this phone has. It is IP68-certified for dust and water resistance. 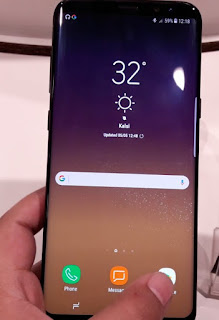 Bixby is Samsung's answer to Apple’s Siri and Google's assistant.  It responds to both touch and voice and has an ability to translate as many as 52 languages.
Using Bixby, you can take pictures,  identify objects,  places and provide context to photos. However, as of now Bixby doesn't support voice command, also English in Indian dialect isn't supported yet. A future software update from Samsung is supposed to fix this glitch.
Dex transforms the Galaxy S8 into a desktop by providing a secure desktop like experience, but for that you have to invest more in dex-dock that would cost you around Rs 8999/- and in a monitor, keyboard and mouse. The Samsung Galaxy S8 and Galaxy S8 Plus are world's first smartphones to support Bluetooth v5.0, which has 4 times faster transfer rate than v4.2.
Galaxy S8 Plus along with TouchWiz or Samsung UX is a great combination. The UX has been properly optimised for the Galaxy S8 and it works seamlessly on it. The interesting features that come with Samsung UX make multi-tasking smooth and effortless on this phone. Samsung has also reduced the count of unwanted apps in these phones and they feel faster and smoother than all other Samsung Galaxy S phones. Samsung Galaxy S8 and S8 plus support USB Type-C port for fast charging and data syncing. It comes with a bottom facing mono-speaker which is pretty loud.  Phone calls are of excellent quality.

Both front and rear cameras of Samsung Galaxy S8 and S8 plus click fantastic photos. Samsung has made software tweaks to enhance post-processing that give better results, especially in low light. The 8MP front shooter gets an autofocus. It clicks amazing selfies even in low light with good detail and also far less-blur.
The Galaxy S8 is not only reported to beat the iPhone 7 in picture quality it is said to be giving a tough competition to Pixel which until now,  was the best Android camera phone in the market. The Indian version of Samsung Galaxy S8 and S8 plus that come with Exynos processor are said to fare better on camera front than their counterparts being sold abroad with Qualcomm Snapdragon 835 processor.

The cons that I found in this phone are :
1. The back has a glossy finish, which makes it a major fingerprint magnet due to which it gets smudged by the millisecond.
2. I found The placement of the fingerprint scanner a bit odd as it is located just next to the camera lens, which could sometimes create confusion and smudge the lens every now and then. However,  in the long run one would get used to it.
3. The iris scanner, though fast, requires a particular angle for recognition and you need to scan iris keeping that angle in mind.
4. Samsung should have at least provided a 4000 mAh battery as the 3500 mAh is less for the 6.2 inches display and thus the battery back-up falls a bit short of expectations. On heavy usage you need to charge it twice a day.
5. The phone heats a little when used for long time.
6. Bixby Vision, that gives shopping and image recommendations based on images you've clicked with the camera, doesn't works sometimes.
7. At its price point, instead of a mono speaker, Samsung should have given stereo speakers.
However, these shortcomings of the phone get overshadowed by its powerful processor, excellent design and tonns of amazing features that impart the phone a class much above its competitors.