Techiebeez India
Last year Samsung had brought out the NU7100 model in the market and this year in 2019, it has launched RU7100, which is a 4k HDR TV. 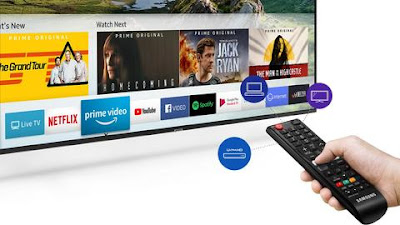 This TV gets a modern look that goes well with any modern decor.

The bezel of this TV though not ultra slim is moderate in thickness. The colour of its bezel is charcoal black and its table top stand too matches with it. The rear of this TV has been graced with a plastic brushed design that imparts a clean look to this TV.

In this TV you get 3 HDMI and 2 USB ports. HDMI ARC and HDMI CEC both are present on this TV. Through HDMI ARC, you can connect a compatible home theatre with this TV, whereas, HDMI CEC gives you the liberty to operate multiple compatible devices with a single remote.

In this TV, you get Ethernet port, digital optical port and composite audio port. This TV comes with dual band Wi-Fi and Wi-Fi Direct.

This is a 4k TV whose panel is 8 bit VA and it has DLED backlighting.

In this TV, you get the support of HDR, HDR10 and HLG, However, it lacks the optimum brightness that is required for an HDR10 TV to play HDR videos in the best quality.

The HDR peak brightness of this TV is not as good as that needed for an HDR TV.

This TV exhibits UHD dimming, which is not as effective as local dimming. UHD dimming only works towards making the colours, contrast and sharpness level a little better.

The Picture quality Index of RU7100 is 1400 and it comes with Samsung's PurColor Technology. The company has not been specific in mentioning the static or dynamic contrast ratio of the TV. It has just referred the contrast as mega contrast. However, the native contrast ratio of this TV is good.

If you watch 4k videos on this TV, they will come up very well and as a normal viewer you will not be able to find out any flaw in it.

But, as a common viewer, you will not be able to make out that this TV lacks in colours as videos turn out to be adequately colourful.

Nowadays, almost all TV manufacturers boast of HDR10 support in their TV, despite them lacking in the prerequisite brightness. So here, I would like to assert that the colour performance of this TV is better than many SDR & HDR TVs being sold in the market.

Now, coming to its performance through a set top box. If you are using TataSky set top box, HD channels will look pretty good. However, SD channels, though watchable, don't look that good.

The refresh rate of this TV

is 100 Hz and it comes with auto motion plus, which according to the company gets automatically switched on during fast action scenes. Despite this, I did observe a little blur while tracking the cricket ball during a match.

The reflection handling capability of the screen is decent, but if you are watching this TV in a fully illuminated room, the reflection can be a bit distracting.

This TV is good especially for sports lovers as its gray uniformity is good and its input lag is even lesser than 11 ms. It is one of the good options for gaming as it supports most of the resolutions. You can comfortably play video games on it. All resolutions, in PC mode, display proper Chroma ratio of 4:4:4. You can also use it as a monitor as its response time is very good.

RU7100 also has an auto game mode and Film mode along with others. The viewing angles of this TV are not very good as it has a VA panel. When you watch this TV from the front, the pictures look good, but as you move to the sides the accuracy of the picture reduces and it appears a bit washed out.

For sound, this TV has been graced with two channel speakers having a total sound output of 20 Watts. Though you get Dolby Digital Plus in this TV, DTS is absent in it. Though, the bass of this TV is not deep, the audio is clearly audible even in a big room. But if you want some cinema like thumping in sound, you will need an external speaker with it.

This is a smart TV that comes with a Quadcore processor and Tizen Operating System. Apart from other applications, you get YouTube, Netflix and Amazon Prime preloaded on it. However, you don't get the liberty to side-load apps on it. So don't expect to watch programmes through Jio TV and Hotstar.

It is also compatible with Google Home and Alexa along with having the support of Bixby and Google Assistant. RU7100 also supports SmartThings App.

It comes with one remote through which you can operate some other compatible devices too.

Some of the other features that are there in this TV are triple protection, which is supposed to enhance its durability, eco sensor for saving power, 22 regional languages support apart from English and compatibility with 3G/LTE dongle. The maximum power consumption of this TV is 150W.

Apart from screen mirroring from mobile to TV, this TV also has the option of sound mirroring.

Now, coming to its overall performance and ratings. I will say, it is a pretty good TV, better than many out there in the market. RU7100 gets 8 out of 10 for 4k video performance. I have not ranked it higher, because it lacks the optimum brightness that is required for a TV to play HDR videos at their best.

And, as this TV lacks wide colour gamut, the HDR performance suffers on this front too.

HD channels get 7 for performance, while, SD channels earn only 5 1/2 out of 10. For gaming performance, this TV deserves 8, but, its pathetic picture upscaling capability deserves only 3 out of 10. Audio can be rated at 6 and smartness too gets 6 out of 10 as many Indian applications do not work on it.

Watch its comparision with vu pixelight 2019


Watch this video in English -