Vu Cinema TV: The Best Bang For Your Buck?

Recently, at a function in Mumbai, Vu launched its new series of Cinema TVs. Apart from picture quality, this time, it has also laid focus on the TV's audio and design. The company says this TV has specially been created for the movie buffs. This series stands apart from the previous Vu TVs as the company has for the first time provided a help centre in the TV itself, where there is a solution to all common queries related to a TV. From remote to various other functions, all have been covered in this section.


Here, I have reviewed the 55-inch variant of this series.
The built quality of Vu Cinema TV is pretty good, it's stylish and it imparts a premium feel. At the bottom, a slim sound-bar has been fused-in with this TV. A gold lining borders the sound-bar, which accentuates the overall appearance of this TV. This time, the Vu logo has been placed on the left bottom, while a Dolby Audio logo is placed on the right bottom of the TV. In the middle again there is a golden line. The two pieces of tabletop stands are artistically designed. They are metallic with Gold finish. This TV is pretty slim and the bezel is minimalistic. 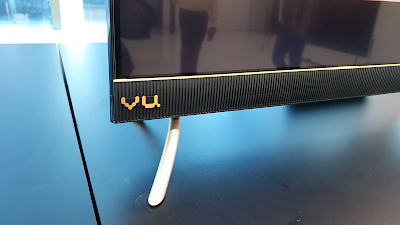 In most of the other brands that come with innovative designs, we usually observe that the sturdiness is compromised because of the slim design, but here, Vu has brought forward a TV that is modish as well as robust.
To make this series ultra-slim, this time, the company has undertaken 100% robotic assembly that permits this ultra-slim design, along with maintaining a uniform on-screen brightness. The brightness on any part of the screen on this TV is almost the same, which enhances the viewing experience and also minimalizes chances of light bleeding.


The Remote is voice-enabled and has direct buttons to Netflix, YouTube, Prime Video and Google Play.
Vu claims that this series of TVs has 500 Nits brightness in it. It says that unlike other brands, in this series, the brightness variation on different parts of the screen is minimal. To prove its point, during the launch event, it provided media with a luminance measuring device. When checked through it, it was found that in the Standard Mode, the brightness of the Vu Cinema TV was 560 in the centre, while the edges showed the brightness as 438. On the other hand, Samsung NU7090, in Standard Mode, showed 387 at the centre, while edges recorded a brightness value of 310. LG UM7300PTA, on Standard Mode, recorded the least brightness at 156 in the centre. On the edges, the brightness value in LG was only 124, which is a shocking revelation.
The Cinema TV has DLED backlighting and comes with Vu's own Pixelium Glass Technology, which, according to the company, increases the light reflection up to 40% thereby enhancing the brightness to a large extent. This technology also works towards improving the viewing angles of the TV. Despite having a VA panel, the viewing angles of this TV is almost perfect like an IPS panel TV. Even if you are sitting in any corner of the room, you can enjoy all your movies and shows without any much visible colour distortion.
This TV has both Dolby Vision and HDR10 in it because of which the picture quality is pretty good. Blacks are deep in this TV and colour reproduction is vivid, but natural. You get to see more or less life-like images on it. 4k videos look excellent on this TV and the HD channels' transmission, especially through TataSky set-top box, looks pretty good. As this is a 4k TV, SD channels though not very good, will not disappoint you at all.

If we draw a parallel between the Vu Premium Android and the Vu Cinema TV, I would say both these TVs have amazing picture quality and picture upscaling capability, however, the brightness in this Cinema TV is tad better than the Premium Android TV and the audio is much better than it. These two features certainly place the latest Cinema TVs, on a rung higher than the Vu Premium Android TVs.
The Cinema TV has VOD up-scaler too, and there is an option in the settings to switch it on. Vu is certainly a leader when it comes to picture upscaling capability and in this new series too, low-resolution videos get up-scaled and play in a much better resolution.

On this TV, Netflix and YouTube videos can be played in a resolution up to 4k.
The refresh rate of this TV is 60 Hz, which though doesn't cause blur during normal television viewing, in very fast action scenes some blur does get evident.
This TV comes with 40 Watts multidirectional speakers and tweeters, which more or less give a cinema-like surround sound experience. The Vu Cinema series of TVs also come with Dolby decoders. The audio, though not like the Nokia TV is certainly notable. The bass is deep and dialogues clarity is good. A fine balance between bass and treble has been achieved on this TV. You will certainly not need additional speakers with it.
This is an official Android TV which comes with Android Pie. However, the company promises OTA updates to this series, including Android 10 update.

Despite all these good features, I failed to understand, why the company has granted this TV only 1.5 GB RAM and 8GB ROM. When I posed this question to the company, it said that all other brands use A53 processor, while in this TV they have used A55 processor, which functions smoothly even on less RAM and ROM.
I did not get the opportunity to test the playability of applications through the Internet, so right now, I cannot endorse this claim of the company. I will tell you about it with surety only when I review their 50 inches TV in my studio.

Watch This Video In Hindi For More Details