Vu Cinema TV Vs Samsung NU7090 Vs LG UM7300PTA Vs Nokia TV|Which TV is The Best In Budget Category?

Is It Worth Buying Lower Range TVs Of Higher Brands?

Recently, I got an opportunity to do a reality check on the lower range TVs of the higher brands like Samsung and LG.
This article is a real eye-opener for all those who prefer a lower-priced branded TV over other budget brands. On my YouTube Channel, Techiebeez India, you can watch the side by side comparison of all these TVs. 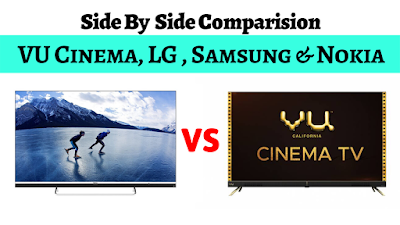 For a reality check on brightness, I carried out a luminance test of Samsung NU7090, LG UM7300PTA and Vu Cinema TV, which is purely a budget offering and the results were surprising.
The brightness of Samsung was 387, Vu Cinema TV recorded 560, which surpasses even the company's claim,
while LG recorded a low of 156, which was absolutely shocking! This test drives home the point that one should not go for the lower range TVs of the higher brands as they are just an eyewash, with companies entering the budget market only to cash upon their brand names' credibility. Maintaining quality standards, in the budget category, does not seem to be a part of their business strategy.

A side by side picture quality comparison of the three TVs was also undertaken during this test. All TVs were set on their Standard Mode. The brightness and picture quality of the Vu Cinema TV turned out to be much better than the other two branded TVs.
Later, we also compared the Vu Cinema TV with Nokia TV, which has been stirring the curiosity of budget buyers. When we watched Nokia TV alone, it looked pretty promising, with 4k videos turning up good. However, when we connected it to a set-top box with TataSky connection, the faces did not appear real, they looked more or less made up.

Despite having an ADS panel, which closely resembles IPS panel, the viewing angles of Nokia TV did not look good at all! Whereas, Vu Cinema TV that comes with VA panel displayed good viewing angles. This credit probably goes to Vu's Pixelium Technology that according to the company, not only improves upon the viewing angles but also makes the black deeper, thereby making the colour reproduction of Vu Cinema TV one of the best amongst 4k TVs.
Vu Cinema TV superseded the Nokia TV in picture quality, picture upscaling, viewing angles and brightness.
On the other hand, on the audio front, Nokia definitely gets an upper hand over Vu Cinema TV, due to its JBL speakers.
The Cinema TV launched by Vu is certainly a clear winner when it comes to picture quality. The only qualm lies in its low RAM and ROM, which for the time being is being seen as a dampener for the television enthusiasts, who prefer to watch programs, like Netflix and Amazon Prime, exclusively through the Internet. They are skeptical if the 1.5GB RAM and 8GB ROM would be able to handle their heavy usage requirement or not? On the other hand, the company, optimistically claims that this much RAM and ROM would be sufficient for even heavy usage as the processor used is an upgraded one.


Till now, I have not tested the playability of the applications on Vu Cinema TV through the Internet. Once I do a detailed review of the TV in my studio, I will be in a better position to arbitrate this matter and break this impasse.